“And she loved a little boy very, very much—even more than she loved herself.”
-Shel Silverstein 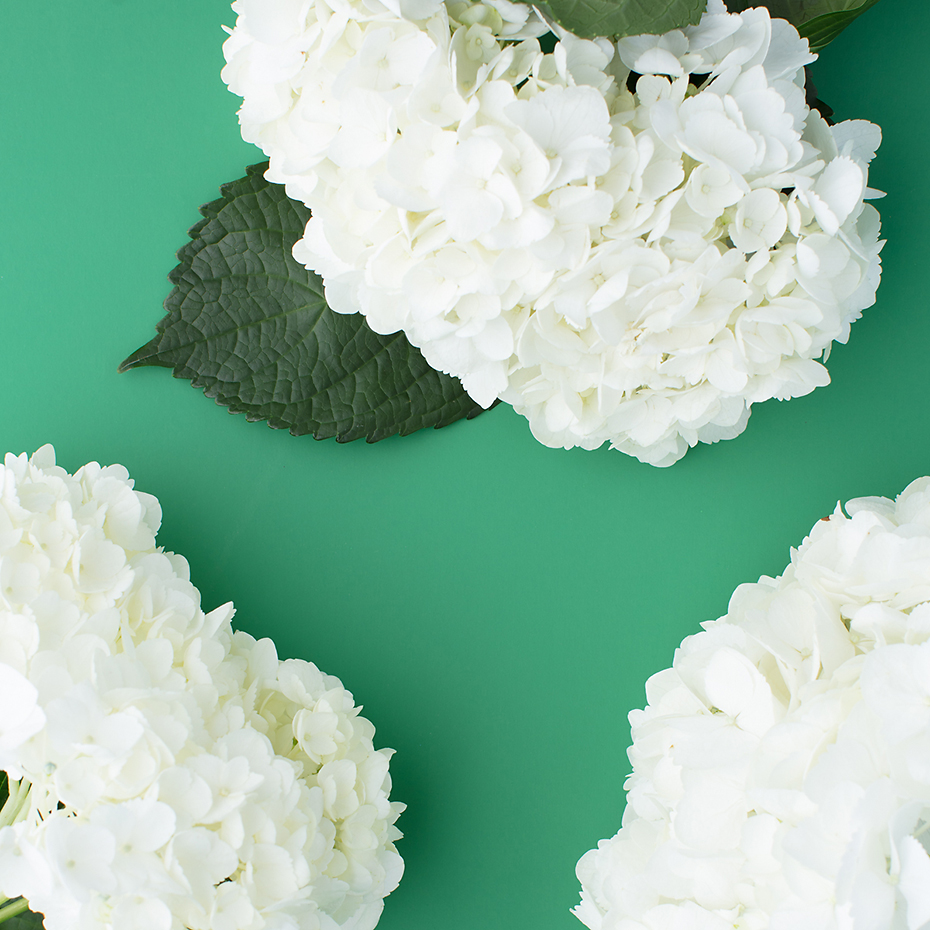 I had tried to get pregnant for months, but an irregular period and seemingly absent ovulations made it very difficult.  I went through a round of making my body ovulate and then a round of Clomid and was disappointed when they told me I was not pregnant.

Because it was mid-December and near Christmas, I decided to wait a month before starting round 2.  Over that holiday, I noticed subtle, but strange changes to my body.  The first was a need to pee a whole lot more…and then I started having a stabbing pain in my lower abdomen occasionally…and finally, I swore my boobs had gotten heavier and fuller.

I went back to the doctor mid-January for my annual exam and shared a few of the weird things I had been experiencing and the doctor quietly asked the nurse if my urine sample was still in the lab.  It was not, so she told me she just wanted to double check my insides and grabbed the ultrasound machine.  With that weird little probe, she found the greatest surprise I had ever been given which was my little boy on the screen.

Oddly enough, I was around 11 weeks and had basically gotten a pass through my first trimester!  Talk about excited!  I was so thankful to have gotten pregnant and then to be at the point that I could feel pretty secure that everything would be ok.

A few weeks went by and we found out we were expecting a boy and were so delighted.  I had figured out pretty quickly as I began having regular appointments that the only doctor that I liked in the practice I was going to was the one I had seen for the last 10 years…so, I began the search to switch doctors.

I had never really heard about midwives before, but the more I researched birth and birth options, the more I realized I really wanted a natural birth with a midwife.  I found a great practice about an hour from our home that included Midwives, OB doctors and MFM doctors all in the same office.  This helped alleviate my mother’s concerns over a midwife birth because everything could be done naturally at the hospital where there was a safe backup plan if needed.

I wish I still had his birth plan…I had everything spelled out exactly how I wanted it done.  And honestly, they did everything in their power to honor it.  My body, on the other hand, did not.

I lost my mucous plug at around 41.5 weeks.  We were at the point they really did not want me to go any further and were thinking of induction.  But, once that little glob of slime came out I knew that we were well on our way to our natural, drug and intervention free birth.

That evening the contractions started…and like a dummy, I did not get any sleep all night because I really wanted to keep track of them.  I am so Type A, so writing down each time the contractions started and their duration was most cathartic for me.  By 6 am, I was ready to go into the hospital and we made the hour long drive up the mountain.

We arrived at 7 and were confirmed in labor, but was only dilated to 4 cm.  So, we began walking, sitting on the ball, rocking, etc…and by 11’ish I was checked again and had made no progress.  They believed if I allowed them to burst my water that it would help the dilation…but, what I did not realize is that it would take the intensity of my labor up tremendously and my body would begin to fully betray me.

The process of being checked while in labor is not fun at all.  For a woman who has been sexually abused and assaulted, it is actually traumatic in and of itself. I honestly had no idea that this was possible until years later, but just in case this is the only post you ever read, I want you to know that past trauma can rear its ugly head during labor.

When they broke my water, it was a very long process that actually took 2 midwives…I should have just stopped them because it was so hard on me, but I went with what they thought was best.  My fluid levels were not like normal and when they tried to grab that little balloon of fluid that is normally above the babies head they could not find it…it was basically like the sac was right at his head…so they worked and worked to get to it.  Not only was this extremely uncomfortable for me, but my sweet boy also came out with scratches on his head.

Finally, once the water was broken, I was told to expect at least another 4 hours of labor to get to the point I could push.  What no one expected though is that my body went into transition, but my cervix did not.  If you have given birth naturally, you know that transition is the shortest time of labor when you are dilating from 7-10…but, it is the hardest.  This is the point that most women give up.

I began throwing up over and over, shaking uncontrollably, I was unable to walk or talk or get out of bed because the waves of contractions kept coming so rapidly.  After an hour or so of this labor, they checked me again and basically found NO CHANGE.  Seriously, you want to talk about feeling defeated!!  I had no idea what to do.  My mom (unbeknownst to me) took the midwife aside and told her I needed meds.  Once the suggestion was put out there, I jumped right on that train.  I said, “If I can’t say I did this drug-free then I want to make sure I feel nothing”.  So, they called for an epidural.

Ugh…the epidural.  Yes, it is sweet relief once it’s in, but the process of getting it in is horrendous when you are having back to back contractions and shaking uncontrollably.  I thought for sure I would have spinal damage because I could not hold still.

I was told to get some sleep because we still were 4-5 hours away from pushing and with the epidural things would probably slow down.  The Mom’s went down to get some lunch and I rolled over for a nap.  Within 30 minutes, all kinds of alarms started going off on the machines around me and nurses and midwives flew into the room.  They rolled me over (cause I could not move) and checked me and by cracky, I was dilated to a 10 and ready to push.

Did you catch that?  30 minutes after my epidural I dilated 6 cm and was ready to push.

Because of the epidural, my body finally felt safe in dilating.  The pain had hindered me and kept me from relaxing.  Years later, I found out that the traumas I had faced came back subconsciously while in labor and my body worked against everything I was trying to do in my birthing classes.  I basically defied everything they thought when I was in a state of transition physically but not according to my cervix.

Fortunately, Joshua was fine and I was able to push him out slowly and easily without any tearing.  It wasn’t until I got home with him that I started to notice things about myself that were disturbing.

Oddly enough, after I got home, I found that I was grieving for the birth I had planned.  I could not make anyone understand why I was so devastated by things not going the way I thought they should.  I also could not understand why I could not shake off the feelings of guilt and shame over failing at natural birth.  I thought I should just be happy that I had a healthy baby and I was healthy, but there was something underlying that I could not put my finger on.

Then, I had an irrational fear that my baby would die.  I could not drive anywhere alone with him because someone had to sit in the back seat to make sure he was ok.  I could not leave him in his crib so I slept on the couch and he slept in his bassinet next to me.  I would cry during the night as he projectile vomited and felt like there was no way I could do all that needed to be done as his mother.

And finally, when he was about 3 months old, the anxiety disappeared and I realized I had been suffering with what I thought was PPD, but have since realized (because it wasn’t even heard of 10 years ago) that I had Post-Partum Anxiety.  I can’t say that I had healed from the trauma of his birth, but at least all the irrational thoughts and actions were gone.

The main thing is…I had no idea that the grief and despair I had over our birth was a result of a Traumatic Birth Experience.  I also did not have the awareness of why it had happened (as I explained above how my body received the pain of birth as trauma) until many years later.  It was through the process of several other birth experiences that you can read on this blog that I came into an awareness of all these things.

This is why I want to share my story and the story of others to make the awareness known.  Feel free to email me and let me know your story.  I would love to feature it for other Mother’s to heal. 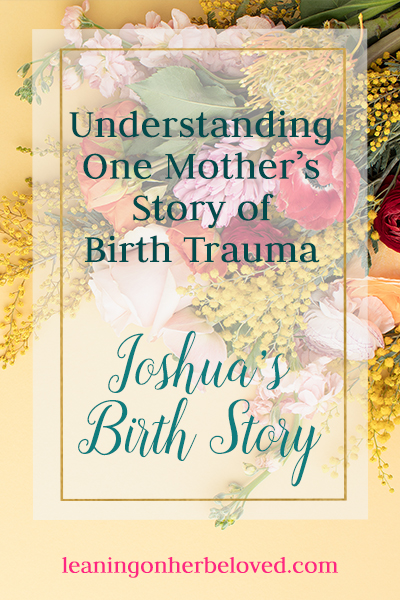 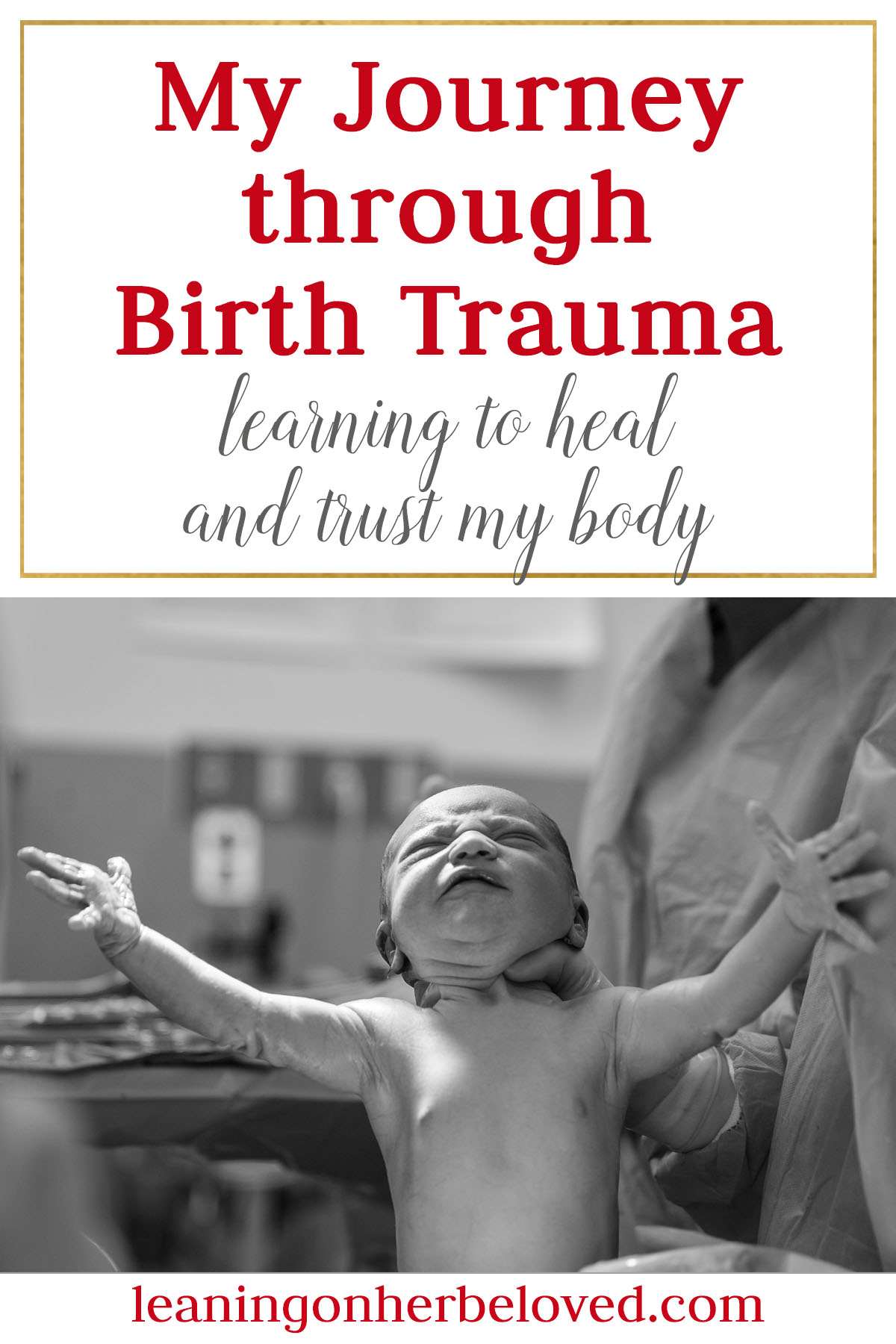 « What is Leaning On Her Beloved?
What is Birth Trauma? »